It’s a presidential election year in the United States. Many are seriously beginning to consider who will be their preferred candidate to lead the country. Will it be someone who supports clean air commitments that the country made this past fall in Paris? Or maybe it’s someone who wants to retain hundreds of thousands of well-paying jobs. Others still may want to know which candidate will help to ensure this country’s ability to generate safe, reliable and efficient baseload energy. 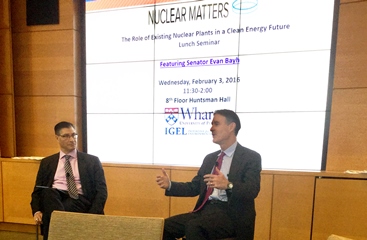 Former Sen. Evan Bayh (right) speaks to the benefits of nuclear energy for a clean air future during a Nuclear Matters event at the University of Pennsylvania’s Wharton School in Philadelphia, Pa. (USA).

It may be easy for candidates to say they support such evergreen topics on the surface, but it may be a different story when those evergreens are touted as direct results of running, maintaining and building nuclear energy plants.

That’s where the Nuclear Matterscampaign comes in. Just ask former Senator and Indiana Governor, Evan Bayh, who stands as the Co-Chair of Nuclear Matters. Last week, Sen. Bayh spent his lunch hour as a guest of the Initiative for Global Environmental Leadership at the University of Pennsylvania’s Wharton School in Philadelphia, Pa. (USA).

Nearly 100 people joined to hear Sen. Bayh discuss the role of nuclear energy plants in a clean energy future. Students of all ages gathered, as did state officials, utility and industry experts, and many others, to understand the Senator’s perspective about the importance of retaining the existing nuclear plant fleet and building new plants globally. Nearly 20 percent of the country’s electricity comes from clean nuclear energy. Those in Sen. Bayh’s audience that day reinforced the knowledge that in Pennsylvania, nuclear energy supplies 35 percent of the Commonwealth’s energy; contributes an astounding $4.5 billion in economic output and supports nearly 21,000 meaningful jobs.

So whether you’re voting for a presidential candidate in the state of New Hampshire tomorrow, or considering ballots at the local, state or national level across the United States, consider the source of your clean energy and clean air. Consider whether you want your children to have significant employment opportunities. Ask yourself if the United States will have the economic security to turn on the lights a dozen years from now. Ask if your candidate supports nuclear energy. Then get out and vote. Nuclear matters.