While some teenagers may prefer to sleep in or play video games on Saturday mornings, Westinghouse has been the host to thousands of other teenagers who would rather deepen their interest in science and engineering. Thanks to the Westinghouse Science Honors Institute, now in its 58th year, qualified high school students have an opportunity to experience a broad

Westinghouse’s Sue Piper has run the WSHI program for 19 years. She has seen a steady flow of students eager to get into the program, year after year. “This year we have more 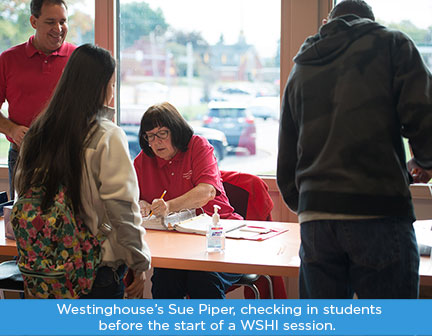 than 600 area students participating in the program,” Piper said. “It’s so nice to see this program continue to thrive. It really helps the students decide what field of science to pursue in college and helps to give them a sample of the educational challenges they’ll face.”

The program began in September 1956, when six days of special events were organized to dedicate the new Westinghouse Research Laboratories in Churchill, Pennsylvania. Each event was aimed at a different public audience, with one day devoted to science teachers. On Science Teachers Day, 175 selected teachers from area schools spent the day at the Westinghouse Research Laboratories. Scientists from Westinghouse, Gulf Oil, U.S. Steel, and Alcoa took the teachers' places in the schools. The program was supported by a
county-wide committee seeking to advance science teaching in secondary schools.

Science Teachers Day proved so successful that plans were made to turn it into an annual event. The program eventually evolved into a concept focused on fostering interest in science through a series of Saturday-morning science classes for the most gifted seniors in Pittsburgh-area high schools. The concept, called the Westinghouse Science Honors Institute, was sponsored by Westinghouse and facilitated by its staff. Scientists and engineers donated their own time to the program, and they still do to this day.

A trial program of six weekly sessions began in February 1958. About 200 students participated, and their enthusiasm led to an expanded program the following year. Twelve lectures were given on Saturday mornings in the fall and winter months. 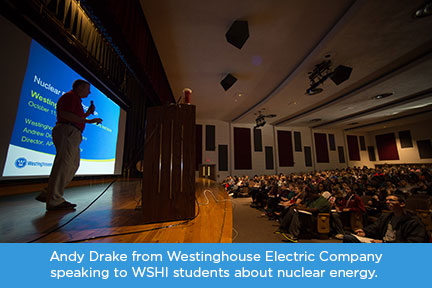 Since 2004, accepted students have also had the opportunity to tour the Penn State Radiation Science and Engineering Center's Breazeale nuclear reactor on three select Saturdays in the fall.

While the program has evolved over the last half century, its objectives remain the same—to awaken and strengthen a sense of curiosity in the participants and to challenge them with new concepts and ideas. “We give the students access to scientists and engineers talking about topics and concepts that one day these kids could be involved in professionally, said Piper. “In fact, I know that’s true because some of our former students now work at Westinghouse.”

To learn more about the Westinghouse Science Honors Institute, visit our page for the program here.