Cranberry Township, PA – August 4, 2022 – Westinghouse Electric Company congratulates Georgia Power, Southern Nuclear, and other project partners on a major milestone in the completion of the Plant Vogtle Unit 3 AP1000® plant near Waynesboro, GA. On Wednesday, August 3, the U.S. Nuclear Regulatory Commission (NRC) provided authorization via a 103(g) finding to Southern Nuclear to load fuel and begin operation. The finding signifies that the new unit has been constructed and will be operated in conformance with the Combined License and NRC regulations. 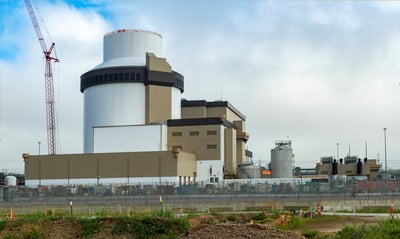 This is the first nuclear power plant built in the United States under the new, simplified combined construction and operating license program that includes Inspections, Tests, Analyses, and Acceptance Criteria (ITAAC) through the NRC. With the NRC approval, the next steps for Plant Vogtle Unit 3 are to load fuel into the reactor, begin the startup sequence, and move towards commercial operation.

“This tremendous accomplishment is a result of the hard work and dedication from thousands of teammates across Southern, Westinghouse, Bechtel, and our local suppliers and vendors,” said Patrick Fragman, Westinghouse President and Chief Executive Officer. “We worked together safely to bring this project to reality. We congratulate Southern Nuclear Company for achieving this important milestone on the path to provide clean, reliable and carbon-free power to the state of Georgia for many decades to come.”

The AP1000 plant is the only operating Generation III+ reactor with fully passive safety systems and has the smallest footprint per MWe on the market. In addition to two AP1000 units being completed at the Vogtle site, four AP1000 units are currently setting operational performance records in China at the Sanmen and Haiyang sites and construction has begun on four additional units at these same sites. Westinghouse AP1000 technology also has been selected for a six-unit project in India, Ukraine has committed to nine AP1000 units, and the AP1000 technology is under consideration at multiple sites in Central and Eastern Europe, the United Kingdom, and in the United States.